This is how we let our twin club be part of our new years celebration... :-)

The next Challenge was to let our Twin Club be part of our new years celebration.

While we received a whole presentation with pictures and greetings from istanbul, we collected pictures of what the members of the RAC Bremen were doing on New-Years-Eve and how they celebrated the new year. The result was the card below. :-)


Here are also some of the pictures from the presentation, which Istanbul has send us. Unfortunately there were too many to upload them all. Have fun watching them! 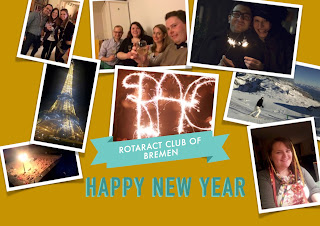 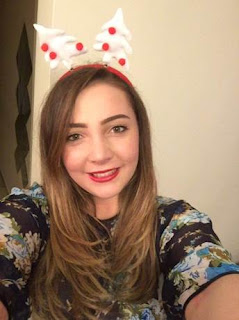 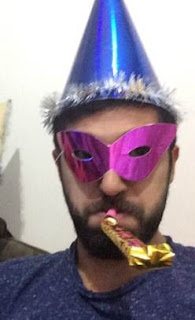 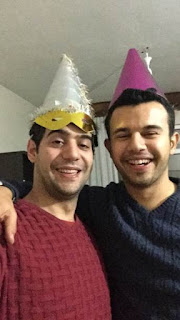 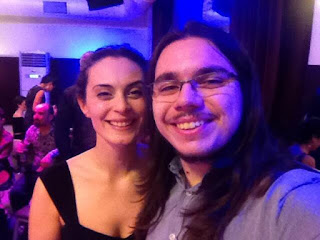 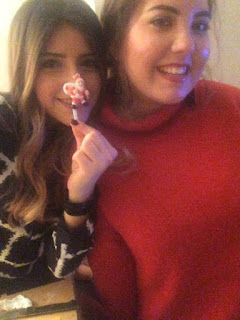 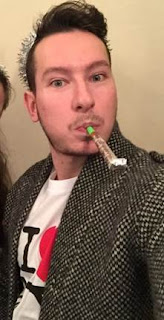 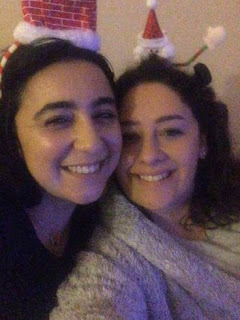 Posted by The Twin Club Experiment at 11:17 AM No comments:

Legend is back! On 21th of November by doing the skype dinner challenge we got back to the dinner challenges with our lovely twin club, Bremen Rotaract Club. We were ready to contact them at the promised time. We were supposed to cook a delicious taste, Onion Pie which our dear friends from our twin club gave the receipt of. After preparing the dough we said hi!:) to our friends via skype. They were also excited to cook and taste our receipt which is a traditional taste, Kısır. Then we started putting the ingredients in the dough and finally put it in the owen and we let the excite began while waiting for the pie to be ready to taste:) ıt was perfectly cooked after 25 minutes and the taste was amazing, eventhough we could not imagine that pie could be that delicious... At the same time, our twin club was done about our receipt and we both started to enjoy our meals:) That was a real fun to work and meet with our twin club again and looking forward to the other challenges:)
Ayça Güntülü ALKAN
Posted by The Twin Club Experiment at 11:12 AM No comments:

We are back! Let the "Twin Club Challenge" beginn...

Friendship is a gift you have to work for every day. To stay in contact with friends that live far away, you have to be creative and committed, so that you do not loose sight in each other. This Blog was created to do exactly that. To reach out to our fellow friends in another country and to show how friendship without borders can be achieved. Now there is a different chapter that is yet to be written. With a new approach we will try to show how you can stay in touch and stay friends without seeing each other. Creativity, commitment and friendship are the key idea of this new project. In a number of challenges, the Rotaract Club of Bremen and Galatasaray Rotaract Kulübü are trying to deepen their friendship for each other. In taking a vital part in each others club life, projects and in having a prosperous exchange in ideas. In the following months we are going to show you what kind of challenges we have created for each other.
Posted by The Twin Club Experiment at 11:09 AM No comments:

After winning TCA, you must wonder whether we still do projects and keep up the work:) The answer is a big Yes:) 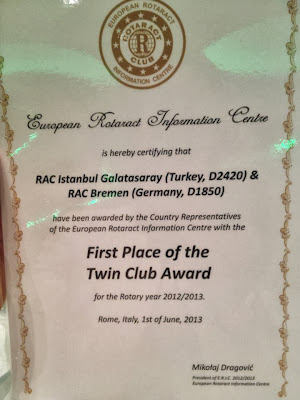 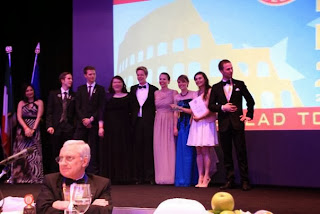 After last year's intriguing project Dinner Challenge, this year we started to make Film Challenge Nights. While Bremen members watch a Turkish production, we watch a German one. We again try to communicate through Skype.


Now the next step may be a combination of Dinner and Film Challenge. I think we're ready for it:)

In addition to this fun project, we are also very excited for our friends' visit to Istanbul, most probably in November:)
We'll do our best to make a great programme and welcome them in beautiful Istanbul.  The months of  November are a bit cold in Istanbul but hey! Our visitors come from Bremen:)
We can't wait for November:)

We also congratulate Bremen Rotaract for Autumn bREMen 2014:) We'll be there, can't miss that.
As a person who already visited Bremen, I would like to say that, it's a magically cute city with beautiful people living in it. Don't miss bREMen:) 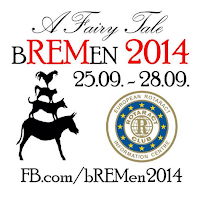 All the best and love from Istanbul:)
Aysegul
Galatasaray Rotaract Club
Past President 12-13

Posted by The Twin Club Experiment at 1:04 PM No comments:

Both of our clubs had been extremely busy with so many things.

In Istanbul the preparation and performing of the annual International Youth Forum in May took time from all the members - additionally to all the other running projects.

In Bremen it was the same with the Charity Run - all powers were hold here.

Additionally we had applied together with our Twin Club Relationship for the "Twin Club Award", an annual competition held by the European Rotaract Information Centre (E.R.I.C.) - and made it to the final 3! Very cool! But it also means work, because we have the possibility to present our idea in two different occasions in Rome during the European Convention (EuCo), which means preparing presentations and so on.

And last but not least: our project "Cooking for Peace" turned out to be much more work than previously believed. Cooking all the wonderful recipes we received - like we originally planned - didn't work out, so we decided we had to break it down to one recipe per participating club. We cooked and cooked and cooked - and gained pounds and experience. Some recipes didn't work out as planned at the first time, so we had to repeat them, which brought more work.

Last Monday the last recipe was finally cooked - about 6 weeks later than planned. Since then we are layouting the book, talking to printers, begging them to print in a very short time enough books for us to take to Rome.

This week therefore meant working night shifts - or as we also like to say: "Service Above Sleep".

We hope the final product will be as good as we imagined, and we really hope you all will like it.
Posted by The Twin Club Experiment at 9:45 AM No comments:

Hi everyone,
First of all, I' d like to tell that we missed you and Bremen a lot.
We still talk about our trip, edit videos, share in internet and spread the word that, now, Bremen Rotaract and Galatasaray Rotaract are Twin Clubs.
Again, thank you for everything :)))

Now the purpose of this post is to share more materials with everyone.
You can see our shared bulletins in English in the following.


All the best,
Ayşegül. 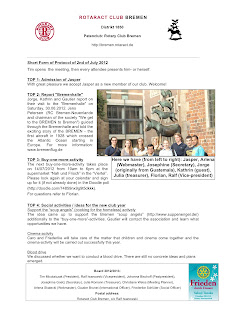 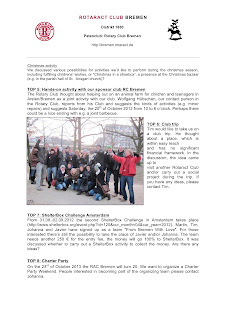 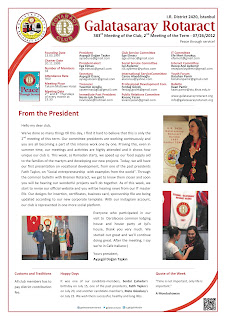 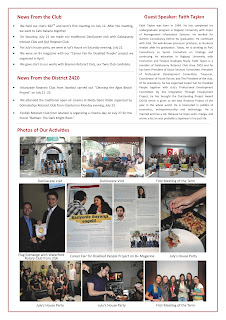 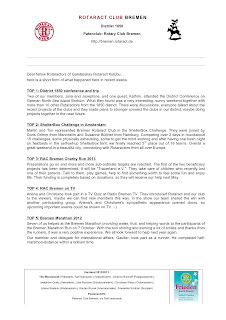 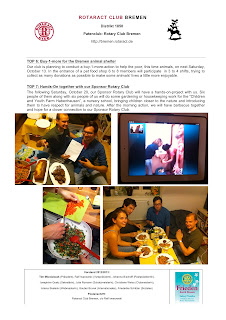 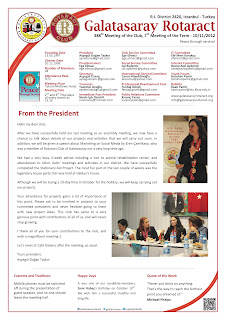 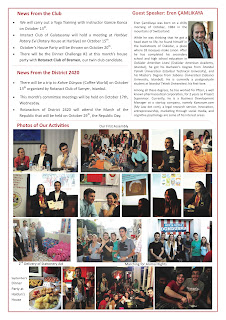 Posted by The Twin Club Experiment at 2:29 AM No comments:

Dear Readers,
For a while now the Rotaract Club Bremen wanted to gather all recipes the members had prepared in the years before for buffets at Christmas meetings, collar exchanges etc. After we had started the “Twin Club Experiment” with  the Rotaract Club Galatasaray in Istanbul  and have done so far three dinner challenges (=> the club in Turkey cooks a German recipe, the German club cooks a Turkish recipe - during cooking and later during dinner we connect via Skype and exchange experiences, maybe you have read about it in this blog), we decided already in July to finally do a cooking book, putting mainly recipes from both of our clubs (ok, it was a very silent announcement, but we weren't sure when we would manage to finally do it).

We called the project
"Cooking for Peace - The way to a Nation's Heart is through its stomach"
and we already presented it with a poster at the Global Peace Forum in Berlin in December.

What do we ask from you now:
This is a "Call for Recipes" :) Every Rotaract club can participate and send us a recipe. They can be traditional, modern or just really tasty ;) - important is that they're possible to cook with not only local products, but that the products can be bought in wide parts of Europe - or at least the local products can be replaced easily by something that actually can be bought somewhere else. And they have to be written in English.
We will choose the ones we like best (criteria example: Can we recook it? How easy are the ingredients to find? How difficult are the recipes?), recook them, take a picture for the book, and then the "winning" clubs fill out a questionnaire about their club and projects. We will then add their recipe, photo and info from the questionnaire into the book. The books will be sold and the money will be used to support projects like a local soup kitchen for homeless people.

For the recipes we have the following categories:
"Snacks and Starters"
"Main courses (including side dishes)"
"Desserts and Cakes"
"Drinks"

As the cooking book shall be finalized and printed in time for EuCo in Rome, we had set the deadline for the recipes to receive on the 28th of February, so that we would have enough time in March to recook them.

Since we have received especially in the last days so many great recipes, we would like to extend the deadline for another week to not miss any recipe, so send us your recipe until the 7th of March, 2013.

Please send all recipes to
bremen-recipes@rotaract.de

Thank you so much!
Posted by The Twin Club Experiment at 2:55 PM No comments: